I work with a growing circle of climate and environmental justice leaders on digital strategy and coverage of actions in the Greater Boston area.

After I started live tweeting protests I developed a dedicated climate Twitter account @ClimateSocial. This account is used to amplify the voices of my network of activists and sharing coverage of area climate protests.

The Twitter Moment covering March 15th student climate strike featured my video showing the opening of the Boston strike. Just one of a handful representing the United States.

Students from around the world have taken the day off from school to protest over climate change. https://t.co/pcfjBx5BcH

From start of Boston #ClimateStrike @climatestrikeUS @ClimateStrikeMA before crowd took over Beacon Street in front of MA state house. pic.twitter.com/L0otBJaImx

There’s more, but the above is a good start.  I lead private trainings for nonprofits, congregations, and other justice leaders.

Video and photo coverage of the West Roxbury, MA climate trial verdict.  Full Youtube playlist of videos from this day.

Think Progress: Judge rules civil disobedience a ‘necessity’ to prevent climate change
A Massachusetts judge found that 13 pipeline protesters “not responsible by reason of necessity” because the action was taken to avoid serious climate damage.

Common Wealth: The Boston climate trial that might have been

Tim DeChristopher, Karenna Gore, area clergy and the larger resistance against the West Roxbury Lateral Pipeline. Approximately a dozen people climbed into the pipeline trenches making the connection between this new fracked gas fossil fuel project and the mass graves being prepared in anticipation of the coming climate fueled Summer heat.

I was Tim’s media team for this action, filming video, taking photos, live tweeting, etc…  Sharing the story of an action via Twitter (more news focused) as it unfolds via photos and videos not only helps the media outlets covering a story, it helps them decide if they want to cover it in the first place. 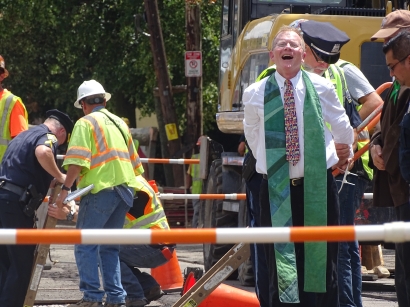 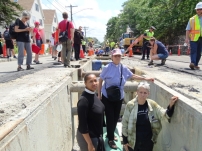 When I’m working to get media coverage of an action, I will live tweet photos and include the #BREAKING hashtag, the hashtag for the location (#Boston) and the hashtag for the action.  I’ll include a tweet that starts with MEDIA and note that my photos are free for media use, and that full resolution images will be available shortly.

This helps media outlets which need to constantly publish new stories to generate ad revenue discover your story — breaking news! — and know that they will have the media they need to support the story.

View my Flickr Album of photos from this action.

Mark Ruffalo, who follow’s Tim, shared the video of Tim’s powerful talk at the protest site.   As someone working media during an action, very rewarding when you reach out to a celebrity who cares about climate and they respond. Thanks, Mark! 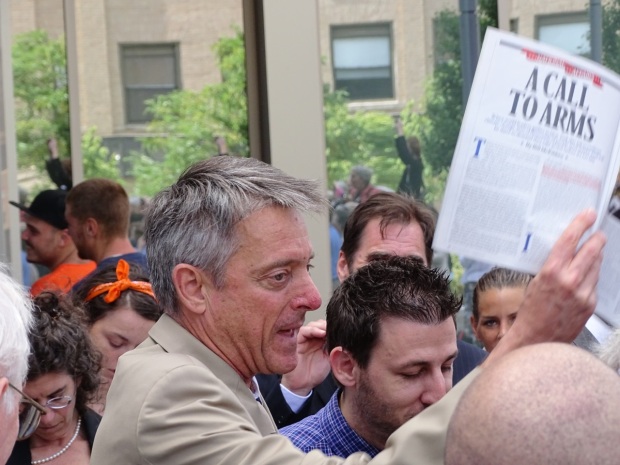 Photos featured in coverage by many additional media outlets including DeSmog Blog  and Think Progress.

When this news broke  — the charges were being dropped — I immediately tweeted the news with the photo above.  Media outlets were asking for permission to use via Twitter within minutes.

Group photos. The media loves them!

I’ve learned that the media loves group photos, people like retweeting group photos, people protesting like having them to share, and they are great for organizations to use for their ongoing communication, organizing and fundraising. I’ve organized and taken a lot of “family photos” during protests.  Some times people don’t see the value, but it always pays off!

Group shot at end of #Boston #StopTheBans protest. Thanks to all protesting today, fighting for women’s rights and reproductive justice! pic.twitter.com/d1ZhQZARnZ

The students at Lesley University down the street from me held a divestment protest. I went over and after watching for a while asked to take a group photo. The lead organizer looked at me like I was crazy. I told them it would help their media coverage and it would take less time for me to take it than for us to debate taking it — we did it! 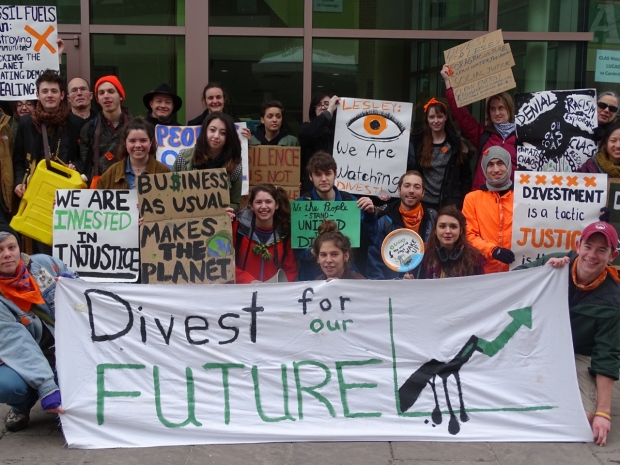 Later it was featured in a Yes Magazine story, then Common Dreams  and the Solutions Journal.

Once upon a time Tim DeChristopher and I produced a climate podcast.  It was an awesome experience, but we got too busy to sustain it. It takes a lot of work. You can still listen to the first season.  Will it ever come back?  Until we tackle the climate crisis, there’s always a chance.